Nanowrimo. Its draw pulls me back here year after year.

1423. The number of words I wrote this morning. I told myself, just write for an hour. About two paragraphs in, I though, "These are all the words you've got," but then I paused and more words came and ideas. Now I'm on my way. My first Nanowrimo was in 2015 and perhaps this one, five  years later, will be my best one yet.

Now time to get the kids up for school. Two more days until Thanksgiving break.

Email ThisBlogThis!Share to TwitterShare to FacebookShare to Pinterest
Labels: nanowrimo

I am so thankful for Nanowrimo. Every year my blog is here but I am not. Then November rolls around and I come back to this place like an old friend.
This is my ?th year. 4th? 5th? Part of me doesn't want to know how long I've been working and reworking the same story. This year, for a change, I am going to focus on three different novels. Still Tea... ALP-A... and M&W.
We'll see how it goes.
One more week!
Posted by R.A.Gudino at 9:04 PM No comments:

I have lost track of my story's flow in the middle parts, which are historically tricky anyway. How many stories to tell and how to keep them flowing? So soon it will be back to Bibisco and my outline and writing the new scenes I have now drawn (in rough pen sketches, like stick figure rough). But now it is late and I am tired. Just my cat, Merry, is still here with me. The rest of my family has wandered off to bed.

Life is hard right now, but writing is a great consolation. I am glad God invented it.

Email ThisBlogThis!Share to TwitterShare to FacebookShare to Pinterest
Labels: the middle

Nanowrimo is here again and so am I. November is such a great month for it. School routines are settling in but the holidays are still not upon us (except my family did tentatively step into the Halloween waters this year... bit of mixed feelings on that one...). So here I am again. It draws me in each year like tomato soup and grilled cheese sandwiches. I catch a glance, then a whiff, and then before I know it I'm signing up and choosing another title for the same story. Yes. The SAME story. Five years now? When was my first Nanowrimo?

(Running off to check)

This is my 4th year entering.

Tea.
Aze.
Sun.
A boy who I have no idea what his name is. Oh yeah, why. Why? Like Why. His name is Why? Yup. (Just because it makes me laugh. Every time.)
The Changeril (see, the titles change but characters stay the same. Hello 2013.)
Riderhill
The big horns
The ghula
The wall, the swamp, the parents, all of it. It hangs out with me all year long, slowly unfolding into its someday final form. This year I have decided not to write at all, actually, for Nanowrimo, but instead to draw. Concise, distilled, essence of each scene pictures. If a picture is worth a thousand words, I figure counting each picture as 1667 words is close enough. So 30 days, 30 pictures, here I come.

Just a reminder to self and others: There are no Nanowrimo police. No one is going to chase me down because I did not "write" for Nanowrimo, right? (Breathing into a paper bag) It's an illustrated novel, with no words, because it comes to me in pictures. This.is.okay. OCD rule follower - back seat. Time to let freedom ring.

Another imagination of a future interview... I find them oddly helpful and inspiring when I'm lacking the energy to continue.

Are you going to write another book?

Not if it's the same. I'm like Why, one experience, fully enjoyed, is enough.


Where did you get the inspiration for your characters?

I put pieces of myself into all of them.


In real life, my hope is to get from first draft to being accepted by a publisher this year.

Peer reviewed over the summer.

Sending out manuscript from September to December.


Question I want to ask reviewers:

Is there anything that you wish had happened but didn't?

Like, I wish that in the Hunger Games series, the winners who were forced to go back into the Hunger Games arena had banded together and refused to fight each other, having learned and matured from their experiences. Then the conflict in the movie would have come from the government trying to eliminate them in the clock while they worked together to survive.

Email ThisBlogThis!Share to TwitterShare to FacebookShare to Pinterest
Labels: interviews

That Thing You Can't Not Do

Your purpose lies somewhere that way.

I've been reading all these devotionals about finding your purpose and how to tell what it is and God's gifts and that there is a greater story, etc. Ultimately, they just left me more insecure and feeling worse about myself. I don't know what my purpose is. My just turned 5 year old daughter, for the last few months, has been asking me over and over, "Who are you?" which is an oddly timely question since I have never talked with her about my existential angst. She asked me again as I write this. Ha!

What is that Thing that you can't not do? The answer for me is writing. It's almost like I haven't lived it until I write about it. My dad's recent cancer diagnosis. My search for a home. These things drive me back again and again to words. Words to describe, to wrestle with, to make me feel at home again in my life.

I was worried if I moved or changed anything in my life that I would stop writing, as if I was locked into my current life until I finish my book, that if I moved, at all, I might never write again, never get back to it, never pick up the threads.

But that's not true. The words build up inside me until I have to let them out, scribbling on paper or my phone or email or a napkin or my hand, whatever surface I can find that works with a pen. I feel most alive when I write. So now I trust that I will write anywhere, anytime, move or no move That book is getting done, Lord willing, come what may.
Posted by R.A.Gudino at 2:13 PM No comments:

My Book's Skeleton and the Imaginary Interview

My writing process was very chaotic and out of order.* Words or images would come to me at random, so I'd write them down and then build scenes around them. It felt a bit like having pieces from several puzzles on the table but not knowing how or which ones fit together.

Where did you get the idea for the book?

This story started with a phrase that popped into my brain as I came out of the shower one day in Ecuador: "I was born with grey eyes." I unpacked all the isolation and rejection that Tea feels and her quest to accept herself from that one phrase.

How long did it take?

I wrote countless drafts over my three years of Nanowrimo (2015 to 2017), although I started collecting ideas for a novel in a notebook in 2007. I can pretty much say that only a few great-grandchildren of those ideas ever made it into the final book, thankfully! The second half came together quickly and has pretty much stayed the same through all my drafts, but it was only in 2017 that I was able to write a coherent first half, mostly thanks to another inspirational phrase that popped into my brain, "You have been chosen." That solved how Tea ends up at Riderhill despite her eyes and why they don't quite know what to do with her. They can't send her away but they don't let her in either, so she ends up in the middle, still searching to belong.

* Like now, I'm writing the answer to an imagined interview question about the published - and hopefully wildly successful - book when I've just finished the skeleton and it still needs fattening up.

I felt hope in my spirit that I would have a working draft by this December, consisting of the final list of scenes that made the cut. The good news is that today I finished sorting everything into 5 sections with 6 chapters each. I was tired of writing thousands of words over the years that were not contributing to the story as a whole. I would write and delete and write and delete. It was a desire of my heart to finally just work out which scenes would actually be in my novel and focus on developing those. It was hard for me to know what to include because in a creative sense, anything was possible. What made one choice better than another? Even in real life I struggle to choose, and writing was no different, but it is finally done.

I expected more of a sense of accomplishment, which is probably why I writing on my blog, looking for my lost sense of success. Yay! I made it this far! I have decided which bones to keep and which do not belong to my novel's skeleton - 29,545 words - and now I just need to flesh them out. Bibisco has been a great tool that God put into my hands through a Google search for "free writing software."

A month or so before this year's Nanowrimo, I asked God if we could make a deal. I would keep showing up to write if He would help me with everything else. I have kept up my end poorly, but He has been more than faithful to help me see this through.

I am going to celebrate by cutting my hair in time for our family Christmas Eve party. My mother-in-law wants me to dye it too, but I am fond of my white and brown stripey hair. We'll see.
Posted by R.A.Gudino at 2:07 PM No comments: 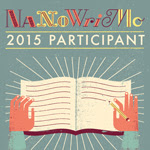